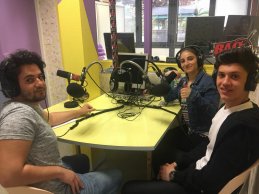 Eros Sana and Robert Suesser on human rights and living without exclusion
Eros Sana welcomed us at his office located in the vicinity of the famous Bonlieu in Paris. The neighborhood looks well-kept with renovated houses and the office has a spacious and green yard.

Mr. Sana showed us movies of the Bonlieu in the past. It used to be a cozy place with central heating system. In the center of Paris, the old houses were comfortable to live in yet things had changed over the last decades.

Mr. Sana grew up in the Bonlieu and as a journalist and lawyer, he actively fights for the inclusion and acceptance for young people, who still live there. "In the Bonlieu we create our fashion and music", he pointed out. According to Mr. Sana people from the Bonlieu want to make their contribution to the society. “We are Parisians of African, Arabic, Russian or other ancestry, but we are here and we want be a part of this city and its society”. Therefore, he tries to introduce an anonymous system of applications for house rental or job search that does not include any information about person’s descent. He believes it would help battle exclusion and discrimination. Additionally, Eros Sana collaborates with Amnesty International on inclusive project campaigns in Paris and its suburbs.

Mr. Robert Suesser was waiting for our interview at the office of the Ligue Droit the Homme in the center of Paris. It was a very quiet place probably built in the 60’s or 70’s. The LDH is one of the oldest human rights organization in France. Robert Suesser is not only a very active member of the board of directors, but also he works voluntarily.

He was an expert for economic transition processes in the East Europe, especially Poland, and he worked for the French government as an economic advisor. Mr. Suesser says that human rights can be protected in global communities, when we - the Europeans, Germans, French - act and think globally and locally at the same time. He also mentioned, that migrants are on the one hand discriminated and on the other they have also a restricted access to society because of two contradictive narratives prevailing in Europe. The first one states that migrants need to have the same rights as Europeans. Yet, the second propagates an opinion that migrants are not allowed to enter higher levels of social and professional life.

In the course of the conference for human rights that took place in Nevers near Paris, young reporters from Berlin met Mr. Eros Sana and were curious to know more about the Bonlieu. We’ve first met Mr. Robert Suesser through his previous talks and discussions about human rights and global communities in Europe in a course of the Summer Academy on Europe’s divisions in Munich organized by the Allianz Cultural Foundation.