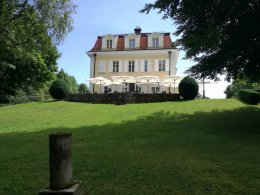 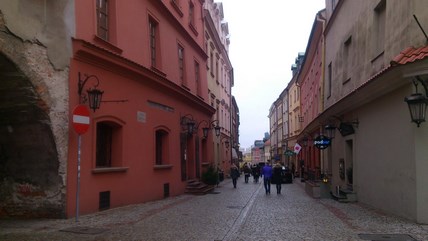 A city and university with diverse cultural influences
"Students from Poland, Ukraine, Belarus, Armenia, Kazakhstan, China and Japan live here like a big family" Maciej Bartoszyk told me. He lives in Lublin and studies here media and journalism at the WSPA University. It was a cold snowy day, as I arrived in Lublin to hold lectures and seminars about radio production at the WSPA University. 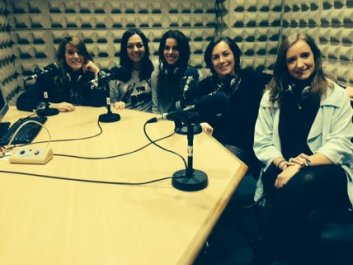 "Hello everyone! We are students of the University CEU San Pablo, Madrid. Welcome to Flight 7325 destination Madrid."

"Greetings from your commander Cristina and your air hostesses Itziar, Leyre, Marina y Paloma. During the journey we invite you to explore the best places in the capital with the help of different prototypes of men. Have a nice flight, see you soon!" 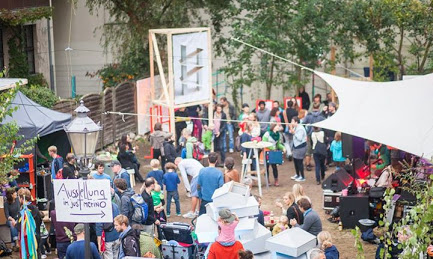 YCBS on city-tour with young citizens of the world  live on 88vier
Experiences, cities, summer and culture, you can expect all of this in our Live-program on 88vier. YCBS auf Stadttour, in English YCBS on city-tour, in Greek YCBS taxidevondas se poleis. In the studio young persons have told us about their experiences in different cities. The moderators Aysegül Celik and Stella Krolak lead the audience through the program in German, English, Greek and Turkish. 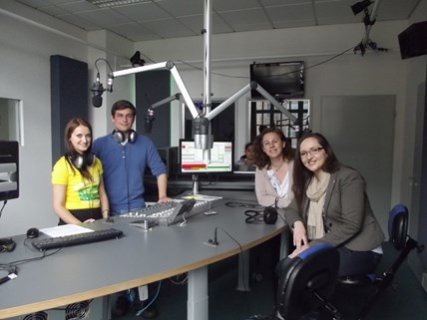 2014 is a special year for Europe!
It has been already 100 years since the outbreak of the First World War, 75 years of the outbreak of the World War II, 25 years since the fall of the wall and changes in Central and Eastern Europe, as well as ten years of EU eastern enlargement. In addition to historical anniversaries there are a number of challenges all over Europe. 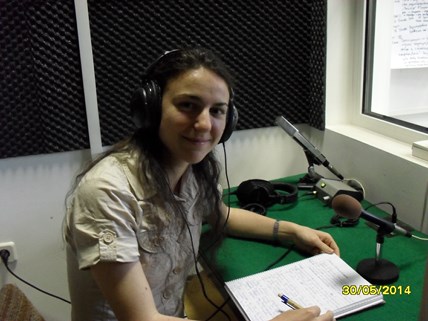 Europe on YCBS, Part one
After the financial and sovereign debt crisis, state bailouts and budget cuts, the May 2014 European elections are expected to take the pulse of public confidence towards the European Union.
For the first time, voters will also indirectly choose the next president of the European Commission, giving citizens a fresh chance to shape the future of Europe.

New media and their influence in our life 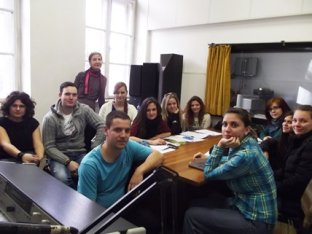 Cooperation with the University "St. Kliment Ochridski" from Sofia
Innovative media
„In the center of the radio feature story is a person, his interests, opinions and problems which are closely tied with the topic given. The story is told from a personal point of view, the language is not distant, we write as we speak. “
During the lecture about radio the students from the University of mass-media and communication will practice and learn how to produce a radio feature.
YCBS and the Faculty for Mass-media and Communication start a cooperation in the field of radio feature production and conducting radio projects. The radio features produced by the students will be broadcasted by YCBS and its radio partners.
The first radio feature production will be focus on the innovative media and new media. The students will prepare radio features on social channels, photography web pages, online magazines and videos in Bulgaria and abroad, they will discuss the topic of new media and their influence in our life.
Our first gathering took place in January. 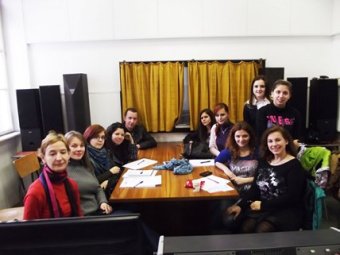 Manuela Manliherova is the mentor of the students taking part in the project. She works as a lecturer in the field of radio programming.
Listen to the introduction of the students and Mrs. Manliherova in Bulgarian, English and Russian.
Faculty of Journalism and Mass Communication, University "St. Kliment Ochridski" in Sofia
Radio projects and productions by students from the University "St. Kliment Ochridski":
"Serdika-Sofia"
"Children of freedom", radio project in cooperation also with Konrad-Adenauer-Foundation Sofia
Moderated by Joanna Czarnecka
Editor Mila Zaharieva-Schmolke
Supported by Leonardo Mobility Program, "Arbeit und Leben"

Microphone and music bring us closer. City portraits from another point of view
Tri-national radio feature with music
First gathering in Marseille, the European Capital of Culture 2013
Goethe Institute Paris and YCBS launch the project in France
Life at the Old Port of Marseille
Fisher Abdul is selling his wares to the pedestrians. His small modest boat is bobbing up and down in the waves. Abdul works and lives in Marseille. A spice seller is sitting beside him. The market in Marseille is crowded with people.
Youngsters from Marseille, La Rochelle and Berlin are embarking on a new project – their aim is to immerse into the market atmosphere of Marseille and to record with a microphone voices and viewpoints of people gathering there. Interviews, ambience and their own moderations will be formed into radio features in German and French. They will compose radio features basing on their research outcomes as well as impressions about the life reality, numerous cultures in Marseille and the daily life of its inhabitants. 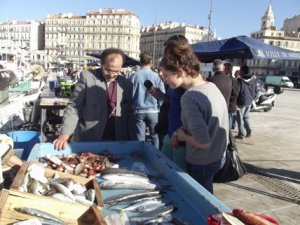 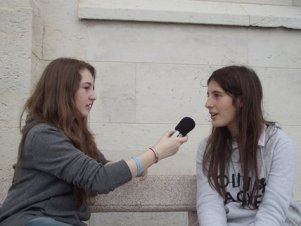 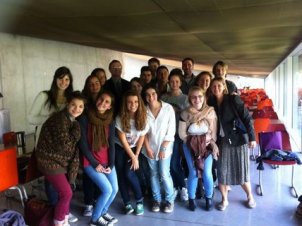 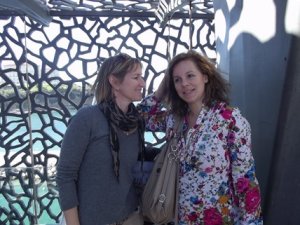 Youngsters from Germany, France and Tunisia record in their own radio features the life realities in their cities. What do they wish for their cities and the future? Basing on conducted interviews they will write and also discuss their texts as well as supported by musicians they will produce songs for radio features.
Students from Berlin and their teachers introduce themselves in German, French, Arabian, Turkish, Chechen and Russian:
City portraits
Students from Marseille introduce themselves in French, German, Spanish, Japanese and English:
City portraits

Goethe Institute Paris and YCBS are authors of the project.
Project participants will attend five day long radio and music production workshops. Experts in media education as well as French, music and German teachers will be assisting pupils.
The radio features will be broadcasted by radio stations in France, Germany and Tunisia and will be available in social media such as facebook or applications. The innovative format addresses young listeners motivating them to tackle topics of the radio features.
In 2013, year marking the 50th anniversary of the signing of the Élysée Treaty Marseille was chosen as one of the European Capitals of Culture 2013. The city with its long history of various cultural and historical influences is the starting point of the tri-national radio – music project.
Pupils from the Herbert Hoover School from Berlin and from the Lycée-Collège Honoré Daumier will participate in the first meeting in Marseille. Teachers involved in the project are: Mr. Cordt von Oven, Mrs. Almuth Bassier,  Mr. Gilles Auterohe and Mr. Lars Scheding.
Lycée-Collège Honoré Daumier from Marseille and YCBS cooperated last year in the course of a French-German radio production competition in which the French pupils won the first prize.
http://www.lyc-daumier.ac-aix-marseille.fr/spip/
http://ycbs.eu/index.php/de/beitrag-4/deutsch-franz%C3%B6sischer-radiowettbewerb.html
Students from La Rochelle and the Académie de Poitiers also attend the project.
The Herbert Hoover School from Berlin is a cooperation partner of YCBS. Pupils attending the school produce their own radio features and documentaries that are broadcasted on YCBS.
http://www.herbert-hoover-sekundarschule.de/index.php/kulturschule/schulradio
Translated by Joanna Czarnecka

The city of glass and gondola

A story about Venice
The city of glass and gondola
The impressive St Mark's cathedral, the St Mark’s Basilica, the Doge’s palace and the Grand Canal are the symbols of the unique city located in a marshy lagoon connected to the Adriatic Sea. Venice is known for its canals and the beauty of its architecture and artworks. Because of its old trading tradition and international links the culture of Venice is strongly influenced by the style of the Middle East and Byzantium. Also today Venice hosts thousands of tourists crowding the streets and bridges of the small city. Historically seen, many Jewish people used to live in Venice but they were forced to inhabit a small ghetto. The word ghetto comes from Italian which origins from GETO. Geto means also iron caster. Because the Jewish people had to live in an unpopular quarter of the iron casters, the district was named geto. The word GETO appeared in the 15th century for the first time. Most Jewish inhabitants of Venice arrived to the city from Spain and the Middle East. In the Middle Ages they had to live in a small Jewish quarter, where one can see narrow streets and sense lack of overwhelming space. Despite the hard living situation in the ghetto at that time, where the houses counting eight floors each are situated very close to one other, around five synagogues were built and a lot of small shops selling Jewish food, paintings, jewelry made by murano glass were opened. Here one finds also a gallery, located next to the building of the Jewish community, that is visited by the tourists and especially by the American visitors. Tony Green is the owner of the gallery. He settled down here because of the lower rent prices.
At the square where Tony's gallery is located you can hear noisy machines. In a shop with a low ceiling Alvise Deste is sitting at the table and painting small glossy glass figures with many colors. The figures are similar to Easter Eggs. When I approach he interrupts his work to speak with me.
Moderated by Anna Stopazzolo and Mila Zaharieva-Schmolke
Author Mila Zaharieva-Schmolke
Music by Prof.Simo Lazarov
Tony's gallery: www.tonygreen.net
contentmap_module