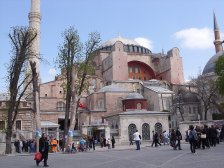 "Sadly, true Christian worship in the Hagia Sophia was silenced long ago. In 1453, the Ottoman Empire conquered the city of Constantinople. The Ottomans were Muslims. They changed the city name to Istanbul and converted the Orthodox Christian cathedral into a mosque. Now it is a museum, and music is banned." (WORLDteen).
In 2020 a subsequent decree of the President of Turkey ordered the reclassification of
Hagia Sophia as a mosque.

For a good speech perception, the space should be ideally able to deliver lossless information from the source to the receiver (listener). Therefore, acoustic peculiarities such as early reflections, late reverberation or noise becomes integral. It was already known before our research that Hagia Sophia has a long reverberation time, which can reach a peak of 12 seconds at frequencies in the range 250–500 Hz. (Dr. Turgut Ercetin, Composer)

The Sound of Hagia Sophia

Hagia Sophia has not only long late field reverberation but also a relatively long-lasting early decay-time (EDT) as well. Affecting one of the two main components of spaciousness, the long EDT makes accurate positioning limited. This phenomenon, in fact, creates a unique aural experience mostly because of the reflective character of the dome and the way in which the cupola diffuses the sound. Harmonically speaking, we also infrared that the reflected sounds sustained by the interior yield high harmonics to communicate with each other in a way that they evolve from dissonant to consonant. Moreover, the clarity index measurements, known as C50s in acoustics, suggest that the interior was not designed particularly for speech. (Dr. Turgut Ercetin, Composer). Turgut Ercetin completed his doctoral degree at Stanford where he studied composition. Ercetin’s works engage with issues of sound, not as sonic colors, but as concepts that are perceived at various degrees of complexity resulting from composed acoustics. He also worked on acustics researches on the Hagia Sophia.
Mr. Ercetin is a Turkish composer and sound researcher. Turgut Erçetin has brought the acoustic aspects of sound quite deliberately into the focus of his creative work.

The Danish Project and the singer Skye Løfvander

There is a very interesting relationship between singing and church acoustics in particular. And this magnificent space of Hagia Sophia was so ernormous, hundreds of years ahead of its
time when it comes to size and building technique. More than 10,000 people could be inside, not only for
religous services but also for the emperors' coronations.
One interesting thing about the recordings is that it was recorded in a huge anechoic studio ... dry to the
extreme that is. So all the walls and the ceiling and the floor were covered with rockwool wedges to cancel
out all reverb. You had to walk on stretched steel mesh covering the 200 square meters studio. And that is
obviously a strong contrast to singing in a very resonant space like Hagia Sophia.
While singing for the recording we had a monitor signal in the headphones, but due to the limitations of the
computer processing power of that time that signal could not be of the virtual Hagia Sophia acoustics but
was a standard big hall reverb. Singing in a anechoic room could be likened to walk through deep snow
whereas singing in the Hagia Sophia is like skiing down a beautiful mountain side. (Skye Løfvander)

Source and receiver positions (for the auralisation) of the Hagia Sophia

Acoustic research on the Hagia Sophia by the Stanford Team and its project "Icons of sound".